Montelukast is a member of quinolines, a monocarboxylic acid and an aliphatic sulfide. It has a role as a leukotriene antagonist, an anti-asthmatic drug and an anti-arrhythmiadrug. It is a leukotriene receptor antagonist (LTRA) used for the maintenance treatment of asthma and to relieve symptoms of seasonal allergies. It is usually administered orally. Montelukast blocks the action of leukotriene D4 on the cysteinylleukotrienereceptor CysLT1 in the lungs and bronchial tubes by binding to it. This reduces the bronchoconstriction otherwise caused by the leukotriene, and results in less inflammation. Because of its method of operation, it is not useful for the treatment of acute asthma attacks. Again because of its very specific locus of operation, it does not interact with other allergy medications such as theophylline. 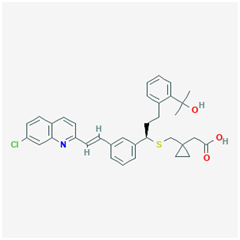 Montelukast inhibits bronchoconstriction due to antigen challenge. Montelukast is a selective leukotriene receptor antagonist of the cysteinyl leukotriene CysLT1 receptor. The cysteinylleukotrienes) are products of arachidonicacidmetabolism that are released from various cells, including mast cells and eosinophils. They bind to cysteinyl leukotriene receptors (CysLT) found in the human airway. Binding of cysteinylleukotrienes to leukotriene receptors has been correlated with the pathophysiology of asthma, including airway edema, smooth muscle contraction, and altered cellular activity associated with the inflammatory process, factors that contribute to the signs and symptoms of asthma. Montelukast binding to the CysLT1, receptor is high-affinity and selective, preferring the CysLT1 receptor to other pharmacologically important airway receptors, such as the prostanoid, cholinergic, or beta-adrenergic receptor. Montelukcast inhibits physiologic actions of LTD4 at the CysLT1 receptors, without any agonist activity.